A moment of contemplation for yourself or on behalf of others on everything from the life-altering to the mundane.


Prayer: A conversation with The Higher Other who lives within each of us. An invitation to vent, to re-think, to ask, and to rest.

Prayers of the People: Sea Change ~ 6th Sunday after Pentecost '18 Yr B 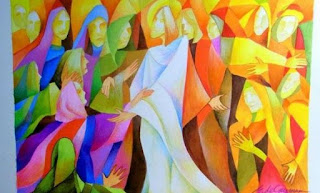 How the mighty have fallen…I am distressed for you, my brother Jonathan; greatly beloved were you to me…
[2 Samuel 1:25a, 26a]

Out of the depths have I called to you, O LORD…hear my voice; let your ears consider well the voice of my supplication … I wait for the LORD, my soul waits for him; in his word is my hope … for with the LORD there is mercy...With him there is plenteous redemption [Ps 130: 1, 4, 6b, 7a]

When Jesus had crossed again in the boat to the other side, a great crowd gathered around him; and he was by the sea...Jesus said to the leader of the synagogue, "Do not fear, only believe." [Mark 5: 21, 36b]

We are living in chaotic times as we try to pay attention to and cope with the whiplashing effects of policy by fiat that spawns humanitarian crises in our own land, upsets the equilibrium of responsible government, and creates havoc with allies and foes alike. It feels much like the storm in the Sea of Galilee that so frightened experienced sailors that they woke the sleeping Jesus who calmed the seas and stilled the winds. When the sea was quieted, Jesus and the disciples crossed over to the other side.
We continue to cross a churning sea of unknown limit and seek to re-establish our footing on solid ground – and in the disarray, the anger, and the fear, some of us move into new consciousness, some of us retreat into the old. This week even as David returns home a victor in war, he crosses over the exultation of winning into the woeful lament and mournful loss of Saul and Jonathan. Saul became an enemy that David still loved nonetheless, and Jonathan, was a friend in life closer to his heart than anyone else. David exclaims, "How the mighty have fallen!" and we suddenly realize, the "mighty" are just ordinary mortals in their decline. Even the “mighty” will end their earthly sojourn in a grave, the great equalizer of us all.
Paul enters testy waters as he asks the Corinthians to cross over from the previous idea of financial support for the poor in Jerusalem, to actually finishing the plan and giving the funds. He tells us all that if we are eager to help, any gift is acceptable given according to what we have and not given from what we do not have. I especially like when he says in verses 13 and 14, I do not mean that there should be relief for others and pressure on you, but it is a question of fair balance between your present abundance and their need…What is too much; what is too little? Our own eagerness – or lack of – will determine how we give.
Mark gives us Jesus and the Disciples after the storm, landing on the other shore where Jesus is met by a frightened father in fear of his daughter's serious illness. Jesus agrees to go to see the child. On the way, a woman afflicted with hemorrhages for 12 years reached for and touched his cloak and was suddenly healed. Then Jesus goes on to the home of Jairus and is told that the child has died – but of course, we know how this story ends.
So two more crossings have occurred into today’s readings – a woman suffering for 12 years crosses back into full health, and a girl of 12 years seemingly dead crosses back into life. Perhaps those witnessing also crossed over into an even greater level of faith in Jesus as Jesus tells the woman, "Your faith has made you well." And it was the faith of Jairus that Jesus responded to in the raising of his daughter.
Again I wonder, what has all this to do with my faith? This is not a message that my faith isn't strong enough if I'm not immediately healed. I believe that it is in the reaching for Jesus that we are led to faith in action, and prayer brings God's support every step of the way. With our constancy in prayer, we will be more able to live out our faith with far less fear of what is and of what is to come. It is in the working through faith that we are healed of the ailments of our souls. It is in a determined community of faith, crossing various angry seas at times and floating along in the moments of tranquil waters, that we find our strength and purpose. With all hands on deck pulling together in all the sea changes we face, giving money, time, and talent according to what we each have, in principle and love, we will bring ourselves and each other safely to that heavenly shore, where there is no death, or chaos, or strife, but only life everlasting. In God, through Jesus, by the power of the Holy Spirit, there is plenteous redemption.

Leader:  ~ O Lord of Mercy and Hope, as we more easily turn to You in the tragedies of life, remind us that Your presence is constant even in the everyday routines. Guide us to be as constant with You, mindful that frequent prayer grows our faith and strengthens our souls.

~ O Lord of Mercy and Hope, awaken compassion, virtue, and morality within ourselves and all who govern in our world, our country, and our community, to ensure that a fair balance be struck between the abundance of the few and the needs of the many. [For USA: On this  242nd anniversary of our country's founding, let us celebrate the beauty, the bounty, and the principles that grant us Freedom, Liberty, and Justice for all.]
We pray especially for: add your own petitions

God of Plenteous Redemption
Hear our Prayer
~ O Lord of Mercy and Hope, relieve the suffering of those with serious illness, addiction, or desperate life circumstance, and give wisdom and respite to those who tend their needs. We now join our voices to pray aloud for those in need…add your own petitions

God of Plenteous Redemption
Hear our Prayer
~ O Lord of Mercy and Hope, fill us with the peace of knowing that those who have crossed to the other side, now live again forever, in the glorious bliss of Your eternal kingdom. We pray especially for: add your own petitions

~ O Lord of Mercy and Hope, we pause in this moment to offer You our other heartfelt thanksgivings, intercessions, petitions, and memorials, aloud or silently…add your own petitions

God of Plenteous Redemption
Hear our Prayer
~ O Lord of Mercy and Hope, grant wisdom, clarity of purpose, and stamina for all Deputies, clergy and lay, who now gather, worship, and do Your work in the General Convention of our Church, to benefit the fields of Christ’s Mission and Ministry everywhere. Strengthen those whom you have called to be our guides through uncharted waters. We pray especially for: add your own petitions


The Celebrant adds:  O LORD of Peace and Wholeness, as the woman reached to Jesus, and the child awakened at his call, grant us the determination to reach towards You with fearless faith, eagerness of heart, and purity of intent. May justice and mercy prevail among all Your people. We ask through Jesus, our Redeemer, and the Holy Spirit, our Sanctifier, who together with You reign as One God, now and forever. Amen.

All compositions remain the property of the owner of this blog but may be used with attribution as long as they are not sold or charged for in any way. For more information or comments, contact: Leeosophy@gmail.com